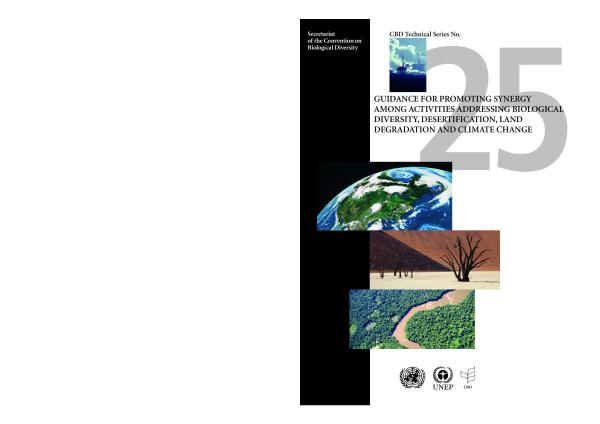 As noted in the Millennium Ecosystem Assessment, climate change is one of the most important drivers of biodiversity loss" and is projected to further adversely affect the role of biodiversity as a source of goods and services. The impacts of climate change on biodiversity have been of major concern to the Convention on Biological Diversity since 2002 when, following a request from the Conference of the Parties and the Subsidiary Body on Scientific, Technical and Technological Advice (SBSTTA), an Ad Hoc Technical Expert Group was established to carry out an assessment of the interlinkages between biodiversity and climate change. The report was completed in 2003 and focused primarily on the impacts of climate change mitigation options on biodiversity, and the links between them, in the context of the Kyoto Protocol.
Tag(s)
climatic changes
vulnerability
disaster risks
Digital Copy
229_1.pdf
Series Title
Technical series no.25
Location
SPREP LIBRARY
Author(s)
SCBD
Publisher
SCBD
Publication Year:
2006
Publication Place
Quebec, Canada
Physical Description:
iv, 43 p
Call Number
[EL]
Collection