Republic of Vanuatu: priorities and action agenda 2006 - 2015 : "an educated, healthy and wealthy Vanuatu" 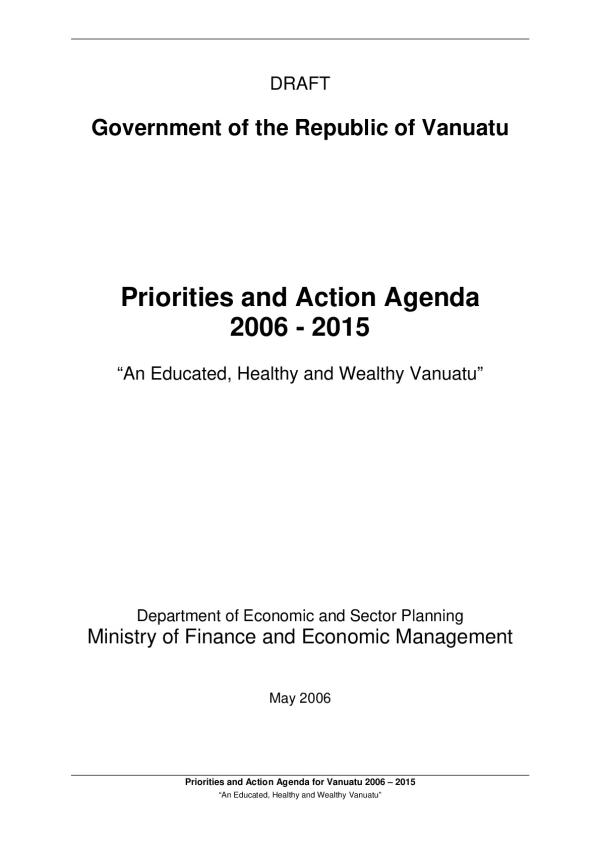 Government policy is to raise the welfare of the people of Vanuatu. Achieving this requires formal development planning. Vanuatu has been working on this since 1997 when the Comprehensive Reform Program was initiated. There was a summit in 2002 during which the Prime Minister announced five priorities. This was followed in 2003 by a Prioritised Action Agenda (PAA) which built upon these five priorities. This document is an update of the PAA, building on the experience of the past, taking account of what has been achieved and the challenges that remain.
Digital Copy
70_4.pdf
Location
SPREP LIBRARY
Author(s)
Government of the Republic of Vanuatu
Publisher
Government of the Republic of Vanuatu
Publication Year:
2006
Publication Place
Vanuatu
Physical Description:
52 p.
Call Number
330.12 REP[EL]
Material Type
Report
Language
English
Record ID:
35004
Legacy PEIN ID:
75007
General Notes
Available online
Record Created: 03-Sep-2008
Record Modified: 23-Feb-2021