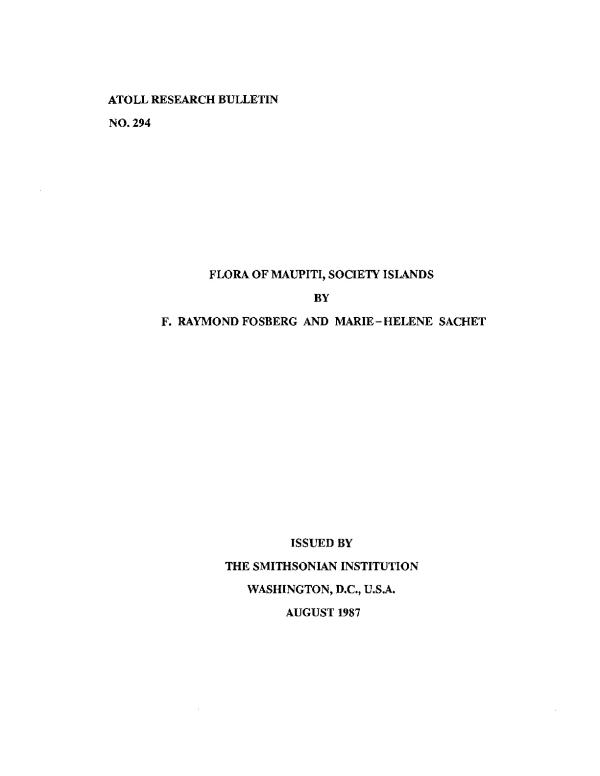 This report includes an introductory section on the geography and vegetation, and a main portion listing the species of vascular plants known to occur, or to have occurred, on the island, with detailed descriptions of those of which time permitted a careful study, and brief descriptions of the remaining native species. Those suspected to have been brought by Polynesians in pre-European time are also described and discussed in some detail. Exotic species are either very briefly described or, especially in cases of very familiar weeds and ornamentals, merely listed with remarks on their occurrences and citations of specimens. Collections by Raynal are cited, as are those made on the 1985 expedition, with symbols indicating the herbaria where they are deposited. The Raynal specimens are in the herbarium of the Laboratoire de Phanerogamie Museum d'Histoire Naturelle, Paris (P).
Digital Copy
download.pdf
Series Title
Atoll research bulletin ; no.294
Location
SPREP LIBRARY
Author(s)
Fosberg, Raymond F
Sachet, Marie-Helene
Publisher
Smithsonian Institution
Publication Year:
1987
Publication Place
Washington
Physical Description:
71 p.
Call Number
[EL]
Relevant Countries
Pacific Region
Collection