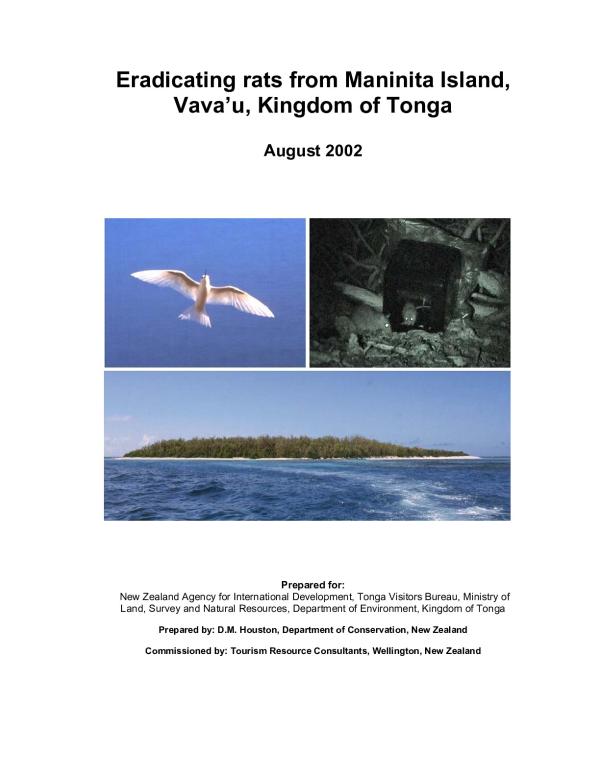 In June/July 2002 an eradication programme to remove Pacific rats from Maninita Island in the Vava'u group of the Kingdom of Tonga was initiated. The techniques used were similar to those used in successful rat eradications in New Zealand, in that Pestoff 20R pellets and a network of bait stations were used. Conditions on the island were not what was expected, the forest having been adversely affected by cyclone Waka and subsequent defoliation by caterpillars, resulting in an open forest canopy. Rats were found to be present on the island in high numbers and were breeding. At this stage it appears that the operation was successful, as no rats were caught in monitoring trapping after 20 days of operations, although follow-up monitoring needs to be carried out in late 2002 to confirm this. There appears to have been no negative impact on non-target species.
Tag(s)
eradication
invasive species
rodents
tonga
management action
management action-management
rattus sp
rats
Digital Copy
39_4.pdf
Location
SPREP LIBRARY
Author(s)
Houston D.M.
Publisher
Tourism Resource Consultants
Publication Year:
2002
Publication Place
Wellington, New Zealand
Physical Description:
13 p.
Call Number
[EL]
Collection