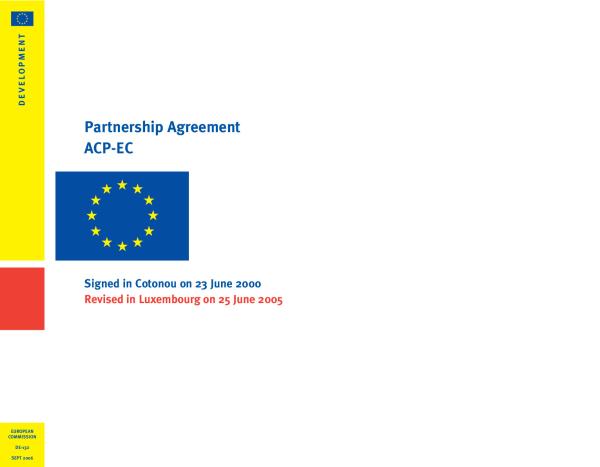 The agreement, signed in Cotonou on 23 June 2000 for a period of twenty years and revised in 2005, builds on the acquis of thirty years of experience. The successive Lomé Conventions had provided a unique model of North/South relations, combining a negotiated system of trade preferences and considerable amounts of aid. Yet the results had been mixed. Evaluations of Community aid to the ACP countries often demonstrated that insufficient account had been taken of the institutional and policy context in the partner country, and this had too often undermined the viability and effectiveness of cooperation. The impact of non- reciprocal trade preferences had also proven disappointing. The rise in private direct investment flows to the developing countries over the previous two decades had not benefited the majority of ACP coun-tries. Although the farsightedness and the contractual nature of the Lomé Conventions were acquis worth preserving, there was also an obvious need to adapt to international and regional developments. The rise in poverty in a number of countries, demographic development and environmental pressures meant that objectives and cooperation practices needed to be substantially reviewed.
Tag(s)
partnership
agreement
Digital Copy
Download
Location
SPREP LIBRARY
Author(s)
Directorate General for Development
Publisher
Directorate General for Development
Publication Year:
2000
Publication Place
Belgium
Physical Description:
193 p. : col. ill. ; 21 cm.
Call Number
341.246 ACP [EL]
Relevant Countries
Worldwide
Collection