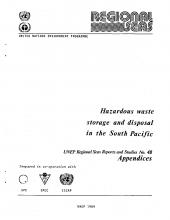 Hazardous waste storage and disposal in the South Pacific

1984
Twelve years ago, the United Nations Conference on the Human Envirorment (Stockholm, 5-16 June, 1972) adopted the Action Plan for the Hunan Environment, including the General Principles for Assessment and Control of Marine Pollution. In the light of the results of the Stockholm Confe- rence, the United Nations General Assembly decided to establish the United Nations Envirorment Progranme (UNEP) to " serve as a focal point for environmental action and oo-ordination within the United Nations system " (General Assembly resolution XXVII of 15 December 1972). The organizations of the United Nations system were invited " to adopt the measures that may be required to undertake concerted and co-ordinated programmes with regard to international environmental problems ", and the " intergovernmental and non-governmental organizations that have an interest in the field of the environment " were also invited " to lend their full support and oollacbration to the United Nations with a view to achieving the largest possible degree of co-operation and co-ordination Subsequently, the Governing Council of UNEP chose " Oceans " as one of the priority areas in which it would focus efforts to fulfil its catalytic and co-ordinating role.
Scientific criteria for the selection of waste disposal sites at sea